A verb indicates the time of an action, event or condition by changing its form.

Let's talk about the progressive verb tense.  For example: I was walking; I am walking; I will be walking.  Was/Am/Will be makes the verb 'to walk' progressive.

Here's a quick example of what the progressive tense might look like compared to other verb tenses:

Progressive verb tenses describe ongoing actions in the present, past or future.
Let's start with the Present Progressive Tense

Alexei is axing the proposal to cut down the national forest. (is axing is in present progressive form)

Michael and Lulu are skiing far too fast toward that cliff. (are skiing is in present progressive form)
Take this quiz and test your skills.
http://web2.uvcs.uvic.ca/elc/studyzone/330/grammar/pcont1.htm
Check out this website for more information on the Present Progressive Tense
http://grammar.ccc.commnet.edu/grammar/tenses/present_progressive.htm

Let's move on to the Past Progressive Tense
The difference between the plain past tense and the past progressive tense is pretty much the same as in the present tense. The single-word form often shows what happened in the past more generally. The progressive form may pinpoint action or a state of being at a specific time or occurring in the past on a regular basis.

Gulliver went to the store and bought clothes for all his little friends. This sentence means that at some point in the past Gulliver whipped out his charge card and finished off his Christmas list (went and bought are in past tense).

Take this quiz and test your skills.
http://web2.uvcs.uvic.ca/elc/studyzone/330/grammar/pascon1.htm
Check out this website for more information on the Past Progressive Tense
http://grammar.ccc.commnet.edu/grammar/tenses/past_progressive.htm

Finally, let's explore the Future Progressive Tense
You won’t find much difference between future and future progressive. The progressive gives you slightly more of a sense of being in the middle of things. For example:

The actor will be playing Hamlet with a great deal of shouting. The actor's actions in the sentence above may be a little more immediate than

The actor will play Hamlet with a great deal of shouting. In the first example, will be playing is in the progressive form of the future tense. In the second example, will play is in future tense.
Take this quiz and test your skills!
http://www.englishexercises.org/makeagame/viewgame.asp?id=4434
Check out this website for more information on the Future Progressive Tense
http://grammar.ccc.commnet.edu/grammar/tenses/simple_future.htm

Finally, let's review by taking these quizzes to see how much you have learned! 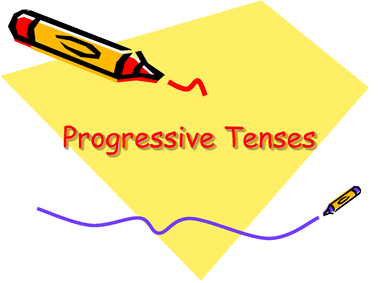