:PRONOUNS:
A pronoun is a word that is  used in place of a noun.

Used as the subject of a sentence. Subject pronouns are I, you, he, she, it, we, and they.

Used after an action verb or as the object of a prepositional phrase. Object pronouns include me, you, him, her, it, us, and them.

Takes the place of a possessive noun. Possessive pronouns include my, mine, your, yours, his, her, hers, its, our, ours, their, and theirs.

Refer to a single person or thing. They include I, me, my, mine, he, she, him, her, his, hers, it, its, and you. Use a singular pronoun with a singular verb.

Refer to more than one person or thing. They are we, us, our, ours, they, them, their, theirs, and you.

Point out nouns without naming them. They include this, that, these, and those.

Ask Questions. They include what, which, who, whom, and whose.

Refer to nouns in a general way without naming the words they replace. They include all, another, any, anybody, anyone, anything, both, each, either, everybody, everyone, everything, few, many, most, much, neither, nobody, none, no one, nothing, one, other, others, several, some, somebody, someone, and something.

Emphasize the words they refer to. They include myself, himself, herself, yourself, itself, themselves, yourselves, and ourselves.           the story.

Refer back to the subject of a sentence. The same pronouns that are intensive pronouns are also reflexive. 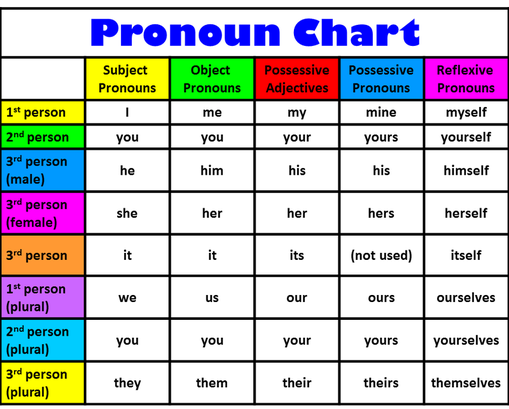 Now, try taking this pronoun quiz:
http://grammar.ccc.commnet.edu/grammar/cgi-shl/quiz.pl/pronoun_quiz.htm
:PREPOSITIONS:
A preposition is a word or group of words that combines with a noun or pronoun to form a phrase that usually acts as an adverb, adjective, or noun. Prepositions can tell four things - location (where something is in relation to something else), direction (where something is going), time, and relationship (between a noun or pronoun and another word).

Two or more words that work together like a one-word preposition. Some examples include according to, ahead of, along with, as for, instead of, except for, and in     case of.

Object of the Preposition 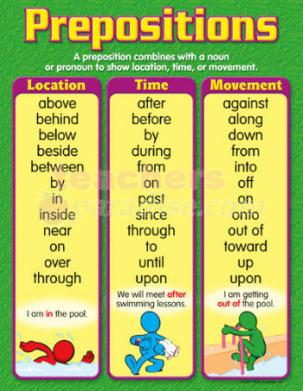 Click here to take a quiz on prepositions:
http://a4esl.org/q/f/z/zz98bck.htm

Try this game after the quiz:
http://www.manythings.org/vocabulary/games/k/words.php?f=prepositions
:ADVERBS:
An adverb is a word that describes a verb, an adjective, or another adverb.

Answers one of three questions: how? when? or where?

Usually answers the question how?

Describes another Adverb. Usually answers the questions how?

Formed by adding er to one-syllable adverbs. Use more or less before most adverbs of more than one syllable.

Formed by adding est to one-syllable adverbs. Use most or least before most adverbs of more than one syllable.

Here are some examples of adverbs:

Try this adverb game:
http://www.studyzone.org/testprep/ela4/g/useadverbsp1.cfm
Didn't like that one?  Try this one:
http://www.oswego.org/ocsd-web/match/term/matchgeneric2.asp?filename=msmith5adverbmatch
:CONJUNCTIONS:
A conjunction connects words or groups of words together.

Connect words, phrases, and sentences (independent clauses). Examples are and, nor, but, for, yet, so, and or.

Connect dependent clauses to independent clauses. Examples are after, before, so, till, where, although, for, so, that, unless, whereas, as, if, than, until, wherever, as if, once, that, when, whether, because, since, though, whenever, and while.

Used in pairs that are split up by other words. Examples are either/or, both/or, neither/nor, not only/but also, just as/so, <and whether/or.

Click below to watch my favorite video about conjunctions EVER:

:INTERJECTIONS:
An interjection is a word or phrase that expresses strong feelings or emotions. It usually comes at the beginning of a sentence, followed by a comma or an exclamation mark.

Still don't understand?  Watch the video below:
Ready to test your skills?
Quiz 1
http://www.writingcentre.uottawa.ca/hypergrammar/rvpartsp.html
Quiz 2
(on the bottom of this page, click continue for more exercises!)
http://web2.uvcs.uvic.ca/elc/studyzone/330/grammar/parts1.htm
Quiz 3
http://www.uvu.edu/owl/infor/test_n_games/practice_tests/partsofspeech.htm 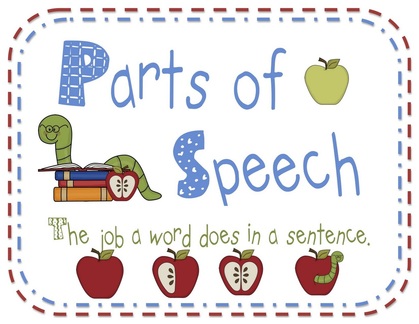